Just a few months ago I blogged about how the 360 degree video opportunity was 70% higher CTR (click through rates). That was then based on statistics from Google and YouTube 360 Video.

Now in January 2017 results from YuMe, Inc. (NYSE:YUME), a leader in brand video advertising software and audience data, we get insight into a positive trend in consumer’s attitudes toward the use of immersive technologies to deliver brand messaging. Immersive technologies includes 360 degree video, AR (augmented reality), and VR (virtual reality). 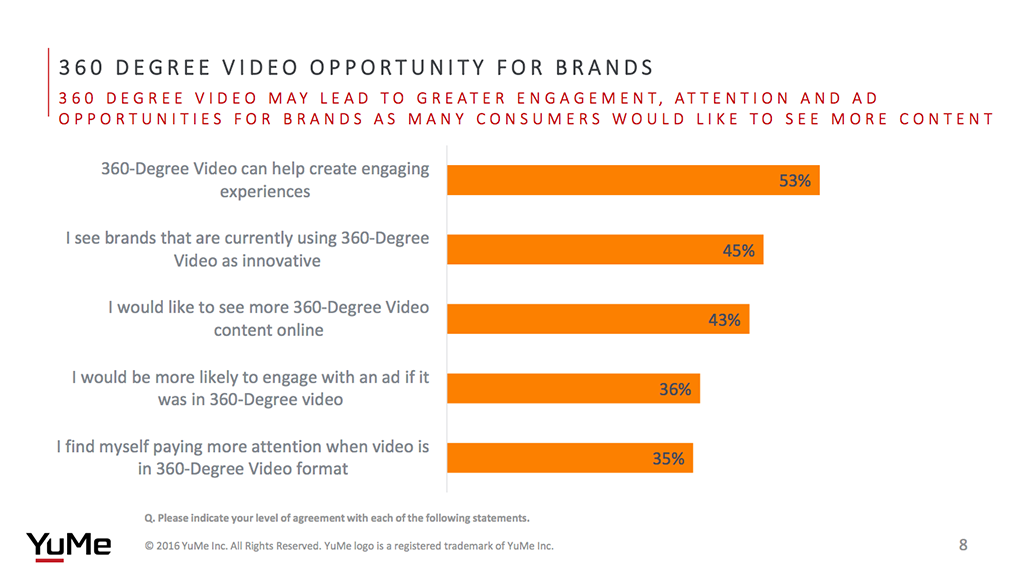 Delivering more engaging experiences and being seen as more innovative is golden for any brand in this attention economy. The downside, for me as a VR Producer, is that 70% of the 360 VR in this study is watched on computers, tablets and phones. The HMD (head mounted display) method of seeing 360 degree video has yet to materialize in larger numbers. The fact that these respondents are this positive about 360 video brand experiences, without full immersion, is a good sign of things to come.

Brands that use 360 VR are seen a more innovative.

“We believe the appetite for immersive ad experiences is growing rapidly and that savvy brands and agencies who want to interact authentically with consumers and drive higher engagement should explore these ad formats,” said Tripp Boyle, VP of Emerging Platforms, YuMe.

The 360 degree video opportunity is a strong impression. There are measurable impressions through CTR if you are publishing on YouTube and Facebook 360 video platforms. Emotional, psychological, and brand perception impressions are even stronger with immersive 360 video and interactive 3D VR experienced with Samsung GearVR or similar HMD.

Contact me if you want to see a demo or chat about how to start taking early advantage of this 360 degree video opportunity.

See how we can help you brand with VR video 360 case sudies and samples.