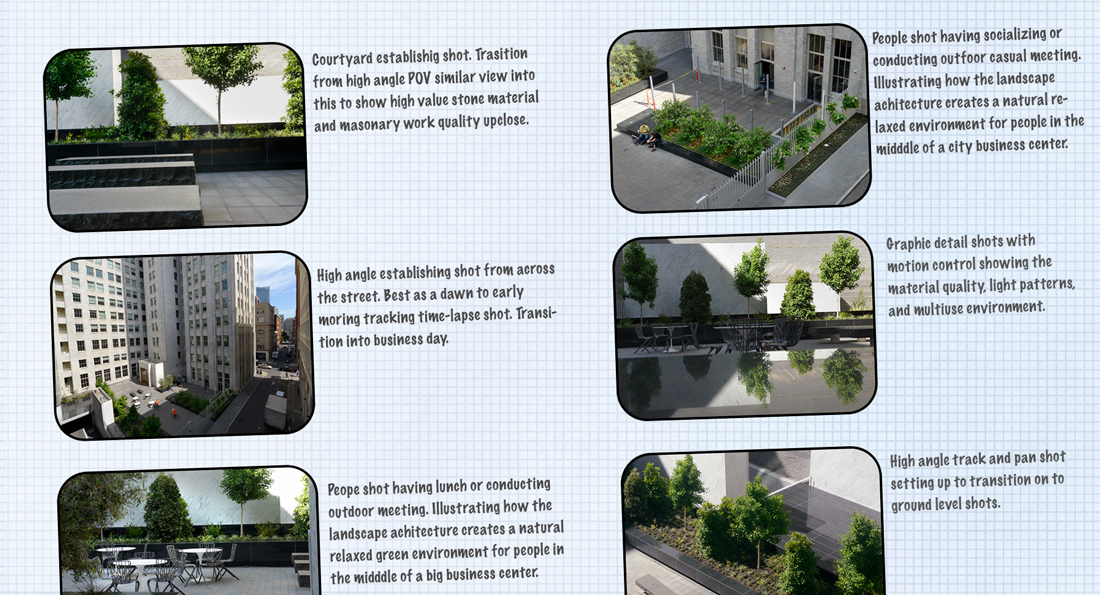 Architecture Video is more than point-and-shoot; storyboards and post-production are key.

One might think that architecture video production, or a developer’s promotional piece, would be pretty straightforward: get a few of the principals to talk as ‘voice over’ while photo examples of their best work are being shown for the next twenty minutes.

Have you ever nodded off during a PowerPoint presentation?

More often, what’s needed, is an approach using a concise script, meaningful graphics, editing and great motion visuals; this, for a profession that is very, very visual.

In fact, capturing the design of a building is not a simple task of just turning on the camera and doing a walk through. What’s needed, are several visits to the site at the optimum times of day to take in the different perspectives with their best lighting; then, a storyboard can be developed to give everyone involved in the project a sketch of just how the architecture video production will be captured, produced, and develop cohesive brand story.

In short, the key is to distill and characterize building exteriors and interiors, as well the architect’s project models, to convey their brand…their message.

The real Wow! moments of a architecture video production usually happen during editing, when all the critical elements of sound-and-visual converge. Moreover, during this process, new ways to capture the architecture visually may present itself. Often in editing a whole new direction of film reveals itself for certain aspects of the film, and good reason to start planning the next architectural video project.

Contact us. Let our professional team help you define your architectural practice, or developer’s goals, to give you that competitive edge with the kind of architecture video that will blow your competitors off any screen.

about architecture story telling with film and video.