Many of my clients and friends know that I have been producing a web series with Translumin Productions. For the readers here on Liquid Lumens, this is the first mention of the comedy web series – Fray for All. As of now, the web series production is operating as a lean bootstrapping start-up, and we are just starting to show a few of the episodes to channels/partners interested in licensing or helping fund a full series.

Writer, Vicki Kozel, and myself believe that comedy brings people together and found a lack of comedy material that deals with controversial current event topics. So with that objective in mind, we are producing quick witty dialog based comedies that address more serious topics like the Ukraine, death penalty, and the end of peak oil.

Our foray into producing a web series was recently published on the Nikon Cinema Blog complete with behind the scenes views and loads information from yours truly on how we are going about the web series production creatively, technically, and starting to build community here in the San Francisco Bay Area with the amazing amount of talent available.

Read the Nikon article – Using a DLSR to Shoot a Webseries 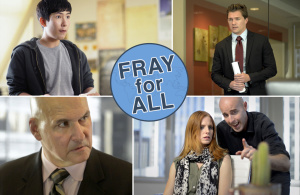